In this article, we’ll look at the latest version of Android: Android 11, which sometimes goes by the name “Android R”.

Android 11 follows the precedent set with Android 10 in that it doesn’t have a dessert-themed codename, or any kind of codename.

While the new version of the operating system has incremental, rather than major changes and isn’t likely to break your apps, there are a number of technical and logistical issues that app developers should take into account.

How Big is the Android 11 Market, Anyway? 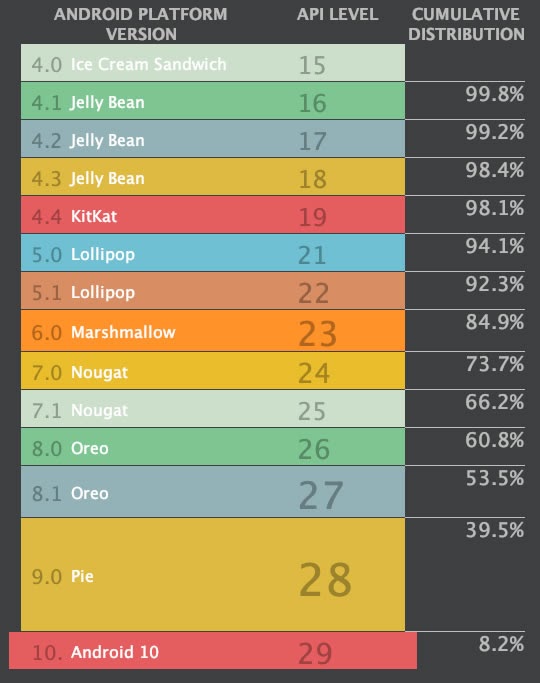 Pictured above is the graph showing the distribution of Android versions at the start of October 2020. It’s based on worldwide active user data from the Play Store and appears in Android Studio’s “Create New Project” wizard.

You can see that Android 10 has yet to capture 10% of the user base, and Android 11 doesn’t even appear in the graph. You might be tempted to put off any effort to upgrade your app to Android 11, but that’s not a good idea.

While Android 10 makes up only 8.2% of the total Android market, that’s still a market of 205 million users, most of whom tend to own the latest devices and are far more likely to invest in apps. It was also the fastest-adopted version of Android ever, having grown to 100 million users in five months.

The adoption rate of new versions of Android has been steadily speeding up with each new version, as this graph from the Android developer site shows:

If the pattern holds, you’ll have time to update your apps for Android 11 — but you’d better hurry!

When a new version of Android is released, phone and tablet manufacturers have to customize it to their particular devices, test their customized OSs, and in some cases, provide the update to carriers. This process has traditionally taken months, but over the past few versions, it has been speeding up.

With Android 8 came “Project Treble,” a re-architecting of the OS’ framework so that Android OS-specific code lives in a separate layer from OEMs’ hardware-specific code. This separation of concerns greatly reduces the time required for OEMs to adapt new versions of Android to their devices — in some cases, by 90 days.

You’ll need to factor this faster time-to-market when making plans to support Android 11.

If you use toasts to provide notifications and reminders to users, you should be aware that there are a number of changes to how they work in Android 11.

This has changed in Android 11, where the system permissions dialog no longer includes the “Allow all the time option”. Instead, the app should show a label for the option in Settings that grants permission for using background location, which takes the user to this screen:

Note that in Android 11, if the app requests foreground and background location permission at the same time, the system ignores the request and doesn’t grant either permission to the app.

This approach, which is similar to the way desktop applications work, makes it possible for different apps to use the same data. For example, it allows you to take a photo with a camera app, edit it with a photo-editing app, and then share it with a social media app.

One problem with this approach is that it raises all sorts of security issues. You don’t want a social media app to be able to read your bank app’s files!

Another problem is clutter. Unlike data in private storage, which is deleted when you remove the corresponding app, deleting an app doesn’t delete the data it wrote to shared storage.

This directory is divided into two areas:

When scope storage was introduced in Android 10, there was considerable pushback from developers, who had grown used to unrestricted access to the external storage file system. Google responded by making use of scoped storage optional for apps that target Android 10 to help developers acclimate to the idea.

However, this reprieve ends with Android 11. Apps targeting Android 11 that use external files must use scoped storage.

Android 11 comes with some changes to the permissions system to better protect users’ privacy.

The new OS the option of one-tme permissions, where the user can choose “Only this time” when the app requests permission to use the camera, location, or microphone. As the name implies, this permission is granted for only as long as the app is running. The next time the user runs the app, it will present another request for permission.

Android 11 also features permissions that auto-reset for apps that haven’t been used in a few months. The operating system automatically revokes permissions to use the camera, location, or microphone in these apps. The next time the user runs one of these apps, the app will present another request for permission.

Android 11 introduces a feature that caches large datasets — the kind that would be used in machine learning and media playback — that might be used by more than one app.

The system does this by caching these large “blobs” (short for “binary large objects”) and making them available to multiple applications. This reduces the bandwidth and space used. 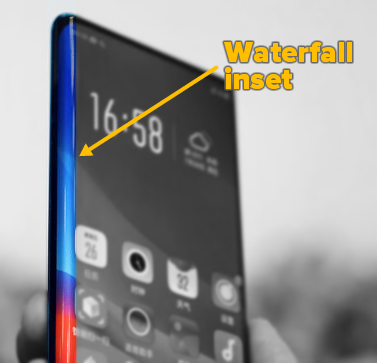 Android treats water displays as one with display cutouts. This means that you can use the DisplayCutout class’ getSafeInset methods to determine which parts of the screen are the waterfall inset.

While the changes we’ve listed are ones that we believe are most likely to affect your app development, this is by no means a complete list. The Android ecosystem covers a wide array of vendors and devices, which means that each new version includes a list of changes too long to fit into a single article.

To see a complete list of all the changes introduced in Android 11, we strongly recommend that you review the Android 11 documentation on the Android Developer site. 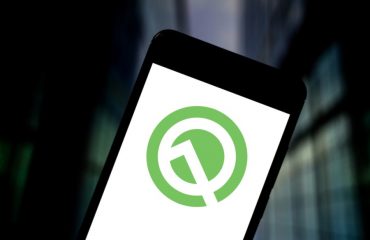 How the New Android Q Will Impact Your App

Android Q is rolling out with a lot of changes this year. If you are responsible for an 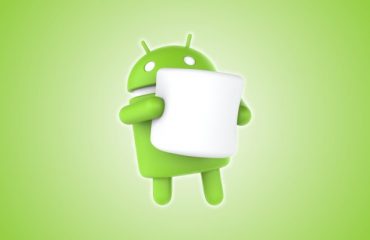 How Android 6 (Marshmallow) Could Cause Problems For Your Android App

Today Android began rolling out their much-anticipated update: Android 6 (code name "Marshmallow"). At the moment it is